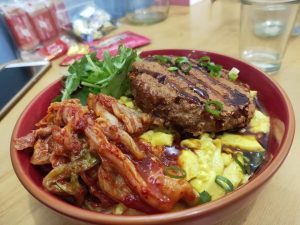 On Christmas Eve last year,  I did something very unusual for a Swedish person. I went to eat a vegan Christmas dinner! At least, I think it’s very unusual because in Sweden we usually eat ham and  meatballs and of course lost of sausages and raw herring on Christmas. I am not vegan or vegetarian, but I am becoming more and more worried about our Earth and climate change and also feeling very bad and sad about all animals that are locked in small cages and spaces only to be slaughtered and end up as our dinners. I think the meat industry is worse than before and it’s so  discusting to see chickens, cows and pigs being tortured. If there were good alternatives, I would for sure become vegan.

One of my students who learned Swedish with me last year, works for a vegan restaurant in Taipei and my friends and I  went there to have our Christmas dinner. She wants to go to Sweden to work for a Swedish vegan restaurant and then come back to Taipei to create more interesting vegan dishes, inspired by her stay in Sweden and the Swedish vegan food. What a great idea!

The main dish, on the photo, is a vegan hamburger served with tofu rice and Korean kimchi. Delicious! And for dessert, on the photo below, we had a rich and very creamy chocolate mousse. 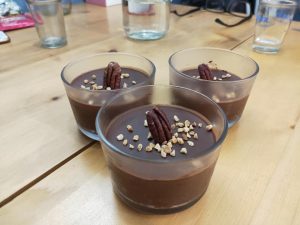 This restaurant is called About Animals and you can find it here in Taipei! I am so happy to find great vegan food and trying to change my lifestyle to become more vegan! I still love to eat lots of Swedish food, but think that I will be able to skip the meat(and maybe also the fish) in the future.