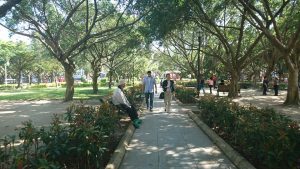 We have started to film Ghostlove here in Taipei. Ghostlove is a short film about a mother who wants to persuade her dead daughter’s boyfriend to marry her daughter. We film everything outside so have to struggle with lots of outside noises such as birds singing, people laughing and shouting and even some park workers cutting the grass. 🙂