Ghostlove, a film that I have written and directed here in Taiwan, was nominated to Semi Final at Cyrus International Film Festival in August. We were all very happy, all members of our film team. It’s a long process to write and make a film and we were almost giving up many times. I am Swedish and the actors and crew are from Taiwan, Canada, South Africa and USA. I love to work with people from different countries and it was an interesting mix.

Ghostlove was in post-production for a long time because we had some problems with the sound. This is very common, I’ve heard. Especially when people are filming outside. We were filming in a temple and also in a park here in Taipei. Being Swedish in Taipei, I feel very lucky to be able to live and work here. There are so many interesting places to discover.

We call our project Love Ghost Film, because the three films are inspired by the old tradition that a woman has to get married even though she is already dead. The films are not talking about the tradition, they are only inspired by it.

Ghostlove is about Alex, an American living in Taipei. He is devastated because his Taiwanese girlfriend, Sophia, has recently died in a car accident. On top of that, Sophia’s mother wants him to marry Sophia in a traditional ghost wedding. She claims that love is forever, even after death.

So far, Ghostlove has had three Official Selections and two Semi Finalist nominations. So happy and grateful! And soon, we will start to film our third film Ghost Free. Life is exciting! 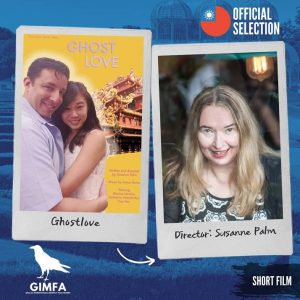